The Royal Enfield Himalayan Scram 411 has been designed to offer a more accessible model in the Himalayan family but with the promise of decent all-round capability. According to Royal Enfield, the Scram 411 is made for “urban adventures,” to address growing consumer interest in the entry-level adventure segment. So, it’s based on the Himalayan, and is a new model in the family, and offers more versatility and accessibility, for the daily commute, the occasional long-distance ride, and with decent off-road capability as well. Does it deliver on all counts? We spent some time riding the new Scram 411 in the city, on the highway, and with a fair bit of off-road riding thrown in to see what it’s all about.

The Scram 411 is a scrambler-styled motorcycle, designed for what Royal Enfield describes as “urban adventures.”

The name ‘Scram’ hints at a scrambler-style motorcycle, rather than a full-blown adventure bike that the Himalayan is. Traditionally, scramblers are road bikes, stripped off bodywork, kitted out with off-road spec tyres and engine protection. Royal Enfield though has taken the other route. The Scram is based on the Himalayan ADV, but it’s kitted out with a smaller front wheel, and slightly less front suspension travel, to make it accessible and less intimidating than the Himalayan. According to Royal Enfield, the Scram 411 takes the Himalayan adventure platform, and uses learnings from flat track racers in a scrambler-styled format to introduce what is called an ADV-crossover. 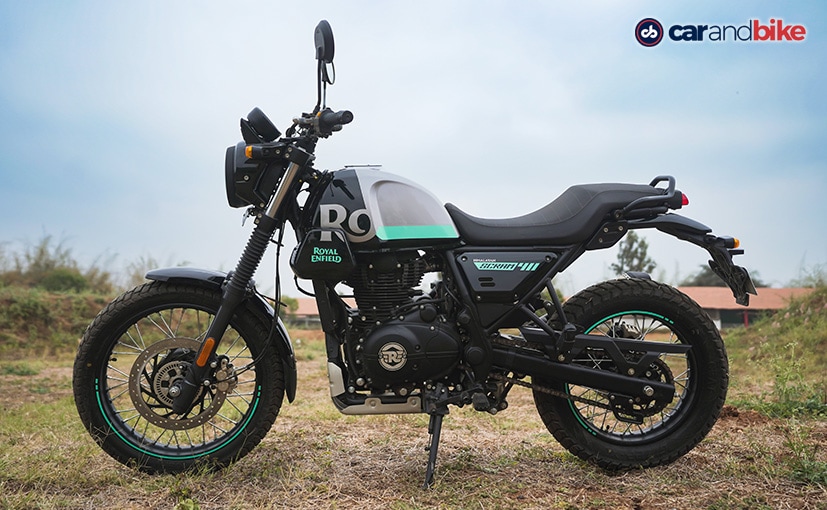 The Scram 411 must live up to the reputation of the Himalayan, which charted a new course for Royal Enfield, by introducing an affordable entry-level adventure motorcycle.

The Scram 411 though must live up to the reputation of the Himalayan, which charted a new course for Royal Enfield. After all, it’s the Himalayan which introduced a Royal Enfield motorcycle that was purpose-built for what many of the brand’s customers have been doing for years – adventure touring, with good off-road capability. The question is – can the Scram replicate all that the Himalayan stands for, at a slightly lower price tag? And can it bring new customers into the Himalayan family who may find the Himalayan a tad too imposing? 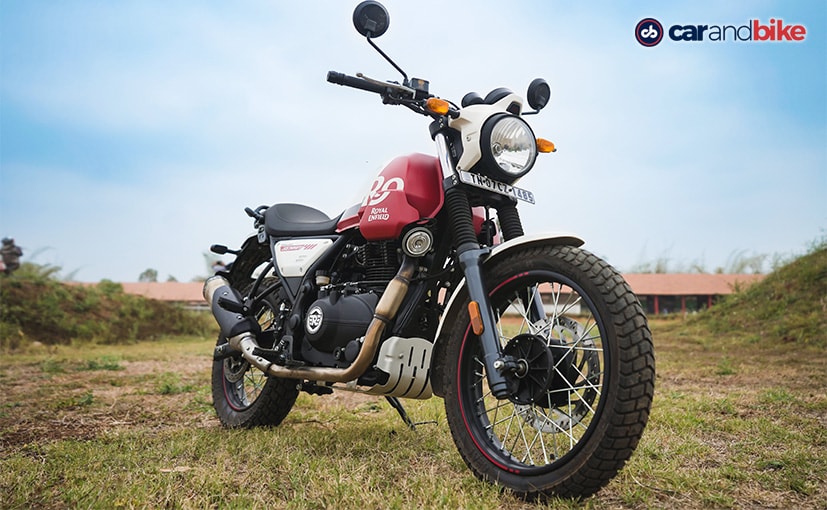 The Scram 411 looks like a stripped down, slightly lowered, as well as friendlier and more accessible motorcycle than the Himalayan.

From the moment you first lay eyes on it, and then swing a leg over it, the Scram 411 feels slightly different. It certainly has similarities to the Himalayan, but it looks like a stripped down, slightly lowered, as well as friendlier and more accessible motorcycle than the Himalayan. Its vibrant colours make it look quite appealing, but there are visual differences. The Scram loses the Himalayan’s windscreen, and instead, the headlight nacelle is new. Gone are the steel carriers mounted on the fuel tank for carrying luggage or extra fuel cans; instead, there are small tank shrouds, and the side panels are also slightly different. The shape and volume of the fuel tank though remain the same with 15 litres capacity. 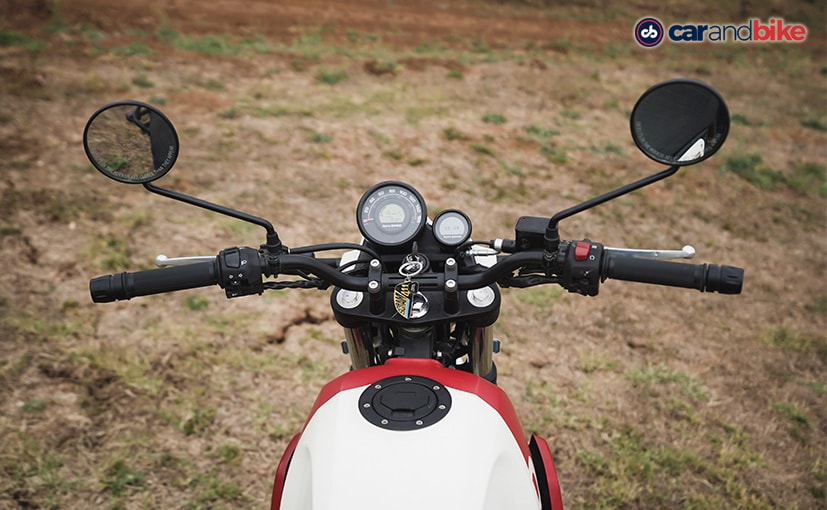 The Scram 411 gets an offset, single-pod, part-analogue, part-digital instrument console. The smaller Tripper navigation pod is an optional extra and will cost ₹ 5,000.

The single-piece seat is new and has slightly lower height, losing 5 mm over the Himalayan. The Scram has a seat height of 795 mm compared to the Himalayan’s 800 mm, with its split seat design. The grab rail is also smaller, making it easy for the rider, and/or a pillion to swing a leg over the bike. The instrument console is an offset, single round analogue speedometer, with a small digital screen at the centre, giving all necessary read-outs like odometer, fuel gauge, gear position indicator, clock and so on. The additional Tripper navigation pod of our test ride is optional and will cost ₹ 5,000 as part of the Make-it-Yours (MiY) custom and accessories program. 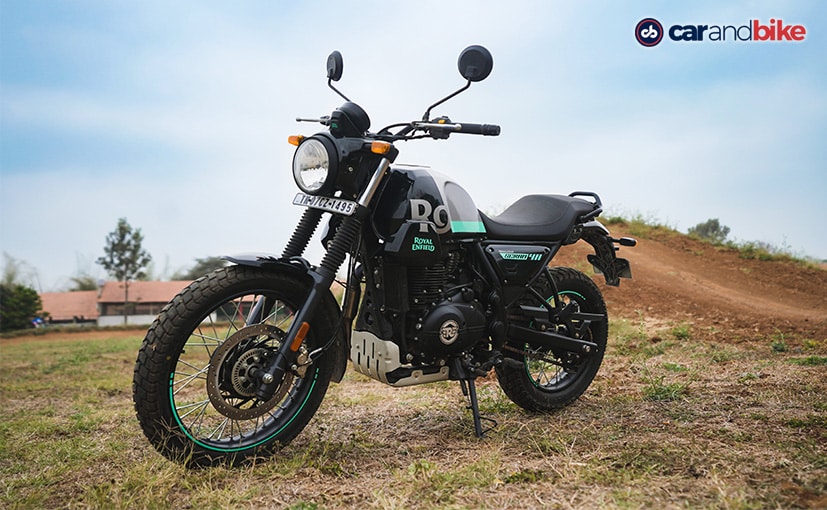 The Scram loses the Himalayan’s windscreen, and gets small tank shrouds. The most significant difference though, is the smaller 19-inch front wheel.

The Scram also doesn’t get a centre stand as standard, which will also be part of the MiY program. The spec sheet says the Scram has a weight of 185 kg without fuel, but with the centre stand fitted on it (1.5 kg), and a tankful of fuel, kerb weight is only 3.5 kg less than the Himalayan’s 199 kg weight. The most significant change, however, is the smaller 19-inch front wheel, compared to the Himalayan’s 21-inch front wheel. 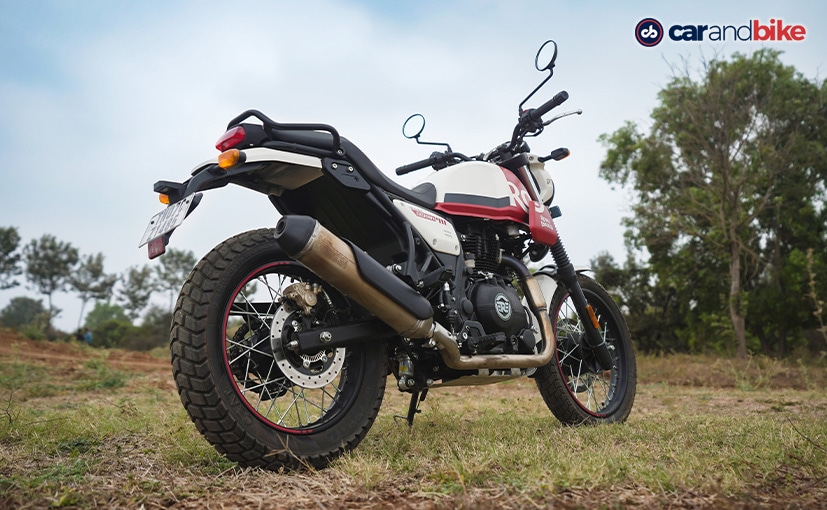 The Royal Enfield Scram doesn’t get a standard centre stand. According to the specs, the Scram’s dry weight is 185 kg, compared to the Himalayan’s 190 kg, But with the centre stand, the Scram is only 3.5 kg lighter than the Himalayan. 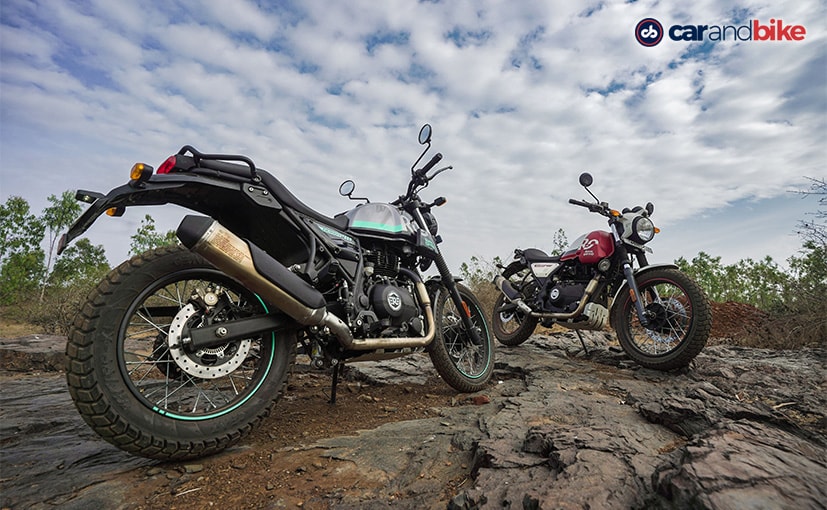 The Scram gets 190 mm front suspension travel, and ground clearance is 200 mm. It comes across as a slightly lower, and more accessible and friendly motorcycle than the rather tall-ish Himalayan. 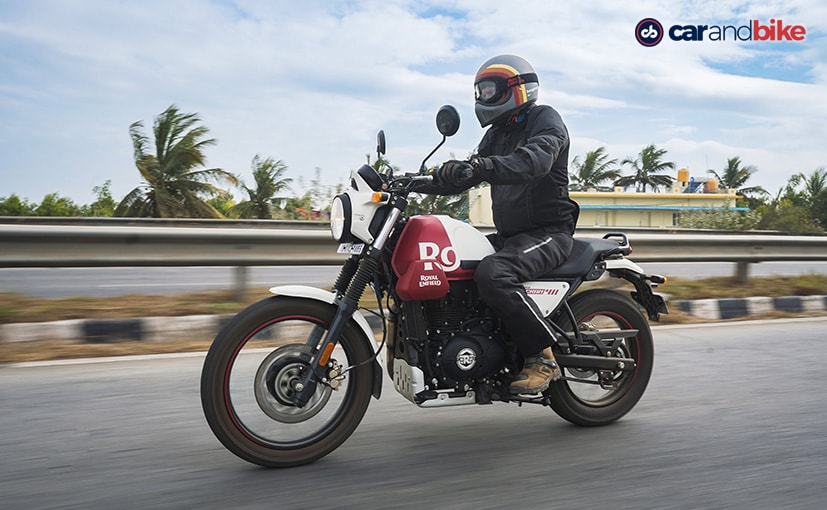 The engine is the same unit as the Himalayan’s but the fuelling has been changed, resulting in crisper and slightly more responsive throttle response.

The Scram 411 uses the same 411 cc, single-cylinder, single overhead cam, air-cooled engine as the Himalayan. The output is also the same, putting out 24.3 bhp at 6,500 rpm and 32 Nm of peak torque at between 4,000 and 4,500 rpm. But the fuelling has been changed to make the throttle response crisper and feel slightly more eager, and the difference is noticeable. According to Royal Enfield, 90 per cent of the torque is available from as low as 2,500 rpm, and that gives the Scram very good tractability, at higher gears at low speeds. The changed fuelling has made the throttle response feel crisper and more responsive. Not a very significant change from the current Himalayan, but definitely noticeable. The same map will also be introduced in the Himalayan going forward. 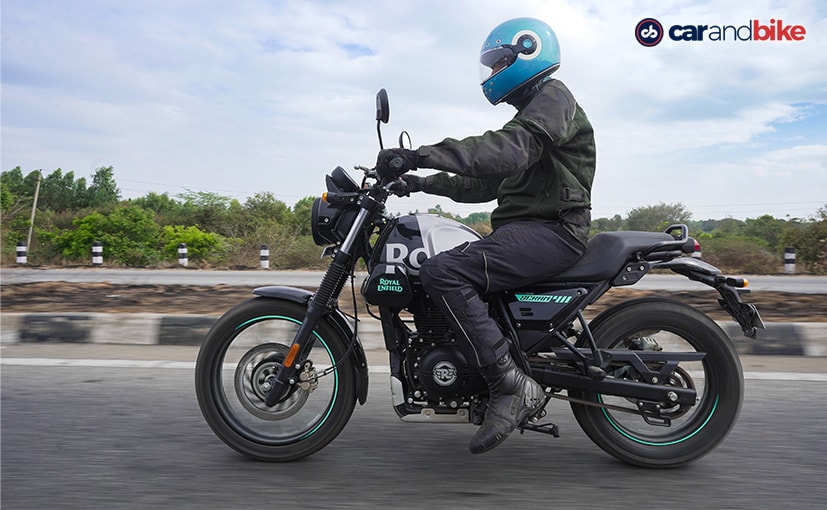 The Scram feels quite at home in traffic, and the smaller 19-inch front wheel makes it feel easy to manoeuvre. Overall, it feels agile and alert on the road, even when taking on the odd corner.

From the get-go, the Scram feels immediately at home in the city. The smaller 19-inch front wheel makes it feel more at home in traffic; it feels easy to manoeuvre and feels agile and alert while negotiating traffic or the occasional corner. The wide torque spread makes the Scram relaxed and doesn’t require frequent gear changes. Third gear is good enough to stay in while using it in the urban environment. Even at crawling speeds, second gear has enough grunt to pull cleanly. 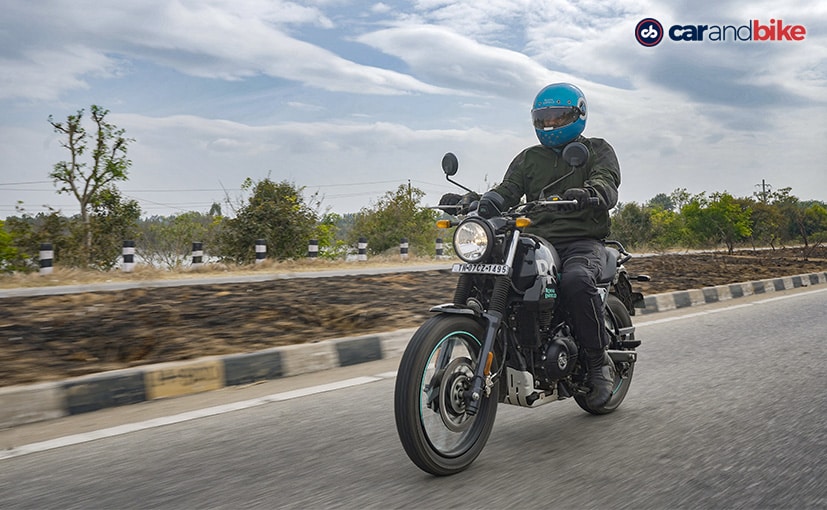 Out on the highway, the Scram can cruise comfortably at triple digit speeds, but 85-95 kmph is the sweet spot, with some extra grunt available for overtakes.

Out on the highway, the Scram 411 offers impressive performance. It’s comfortable for long hours in the saddle and will effortlessly cruise at triple digit speeds all day long. 85-95 kmph is the sweet spot, with some added grunt for some high speed overtakes, if required. On our test route, I saw a speedo-indicated 125 kmph top speed with my 75 kg body weight. With a lighter rider, the max speed will possibly be a little more, but with a slightly heavier rider astride, top speed will be slightly compromised. 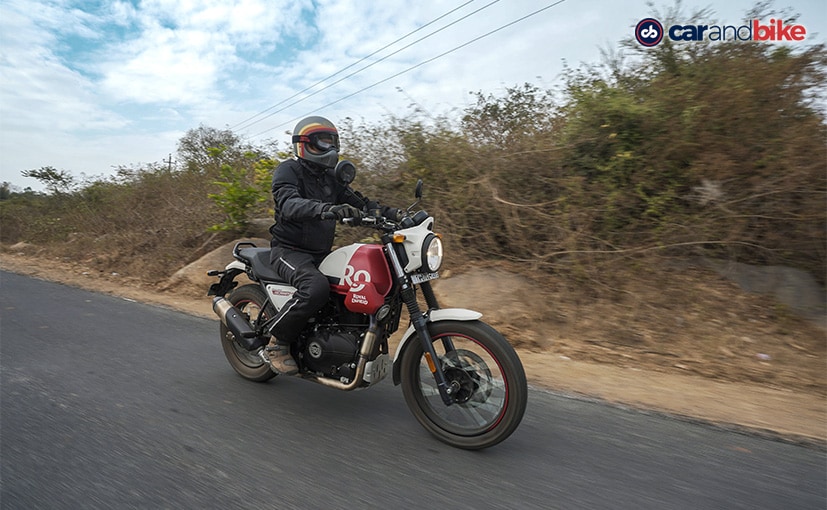 The Scram 411 offers a comfortable perch, and is quite capable for the occasional long distance duty.

However, at very high speeds, at around 120 kmph, I did feel a slight weave on the bike; at first it felt like a strong crosswind, but the weave made itself felt, quite apparently. It could be because of the block pattern tyres, but there’s no recollection of the Himalayan displaying anything similar from past rides. It’s not quite unsettling, but it’s felt at high speeds, and that’s something which Royal Enfield needs to look in to. For the most part though, the Scram 411 still offers a comfortable perch and an easy and relaxed demeanour which makes it quite likeable for a long-ish jaunt, and a very entertaining off-road companion. 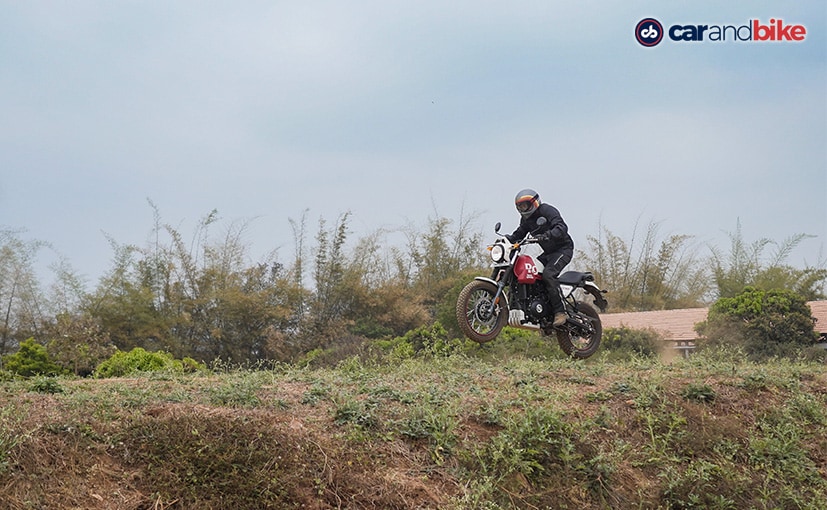 For newbie adventure riders, the 19-inch front wheel set-up actually makes the Scram feel easier to ride, more planted and easier to manoeuvre than the Himalayan. In fact, the Scram is quite a versatile and entertaining package for those seeking a do-it-all motorcycle. 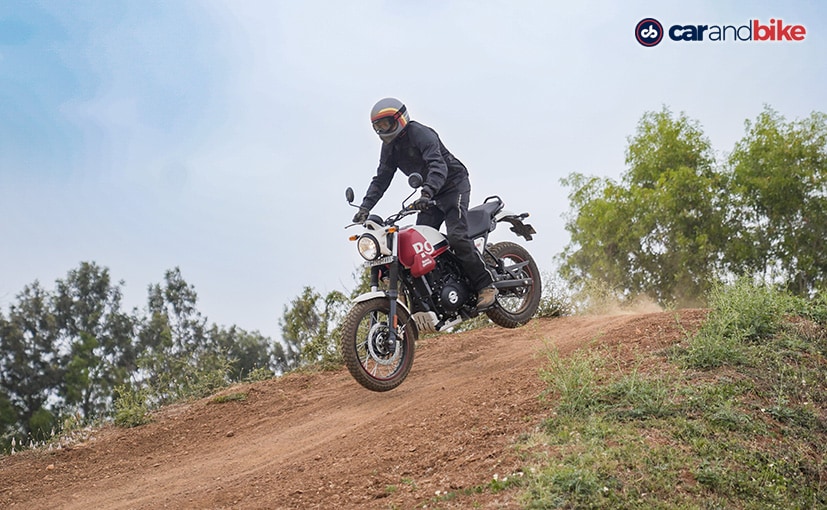 The suspension still soaks up most kinds of terrain we subjected the Scram to, during our test ride. Overall, it still has very good all-round capability.

For newbie adventure riders, the 19-inch front wheel set-up actually makes the Scram feel easier to ride, more planted and easier to manoeuvre than the Himalayan. The fact that many of the Himalayan’s current customers use it more for the daily commute rather than hard-core two-wheeled adventures, the Scram just nails it when it comes to versatility. 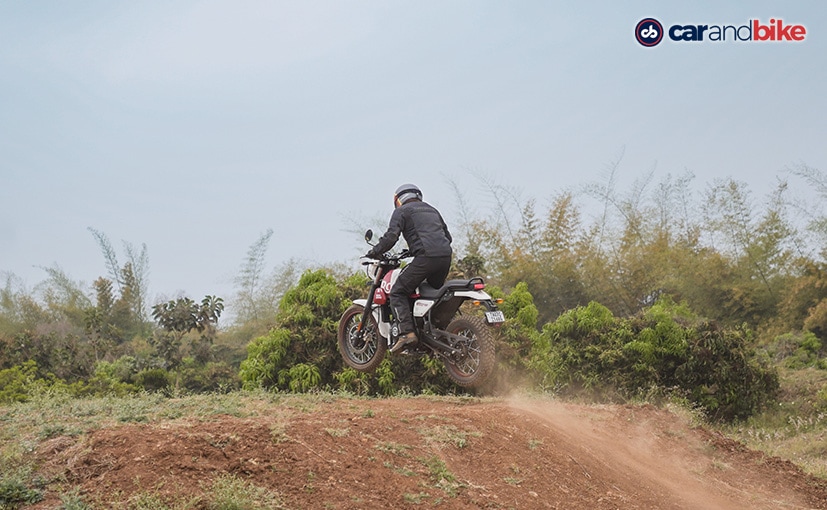 Despite 20 mm less ground clearance, and 20 mm less front suspension travel than the Himalayan, the Scram 411 still comes across as quite a capable all-rounder, which can be used for the daily commute, for the long ride, and also as an entertaining off-road companion.

When the tarmac ends, the Scram springs a pleasant surprise. Despite the apparent loss in ground clearance and front suspension travel, the Scram 411 still offers very good off-road capability. In fact, it can take on almost all kinds of terrain 99 per cent of its target customers will introduce it to. As a bike to start exploring off-road trails with, the Scram 411 certainly makes for a very good case. Our test bikes had less than half a tank of fuel in them, but with a tankful of fuel, it will possibly still prove to be slightly on the heavier side. A weight-loss program during product development certainly could have added to the Scram’s capabilities even further. 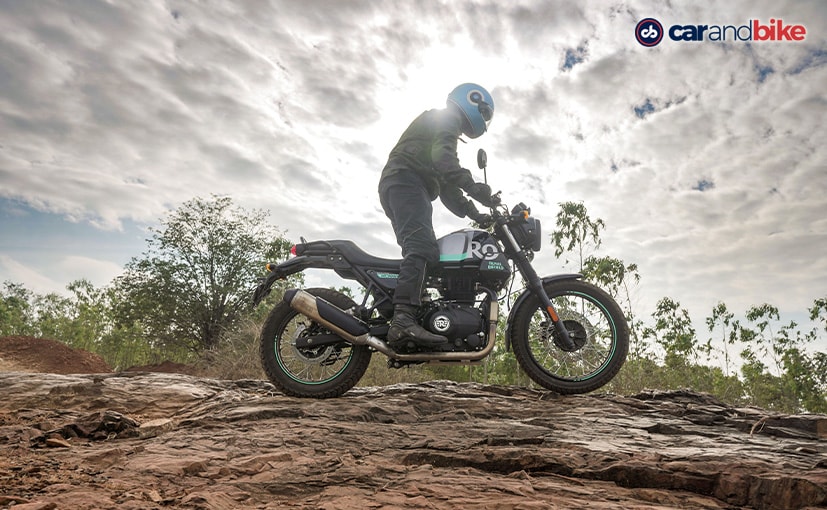 The Royal Enfield Scram 411 is a Himalayan in a new, more accessible and friendly avataar.

The Royal Enfield Himalayan did need a refresh, and it has seen significant improvements over the years, since it was launched almost six years ago. The Scram 411 not just extends the Himalayan family, but also offers a more compact and accessible model, something that has all the qualities to appeal to a diverse range of customers – vibrant colours, compact and more accessible size, and an attractive sticker price. The Scram has a more accessible and universally appealing design, and it gets very good all-round capability.

In terms of rivals, the Himalayan Scram 411 has the Yezdi Scrambler as its closest rival, both designed for similar use, and for a similar customer base. Where the Scram 411 scores big is not just in its universally appealing design, but also its very good all-round capability. The fact that it does everything quite well that is expected from a bike with the Himalayan name in it, makes the Scram 411 a winner in our books!