On Friday morning, as clashes flared at the Al-Aqsa Mosque in the Old City of Jerusalem, Muslims inside and outside the mosque were fasting for the 14th day of Ramadan.

A few hundred yards away, Jews were burning leavened bread, a traditional ceremony that occurs just before Passover, which formally started Friday evening.

A few minutes to the north, Christians were beginning a procession through the Old City, holding aloft wooden crosses, retracing the route that they believe Jesus Christ took before his crucifixion.

For the first time since 1991, Passover, Easter and Ramadan were about to occur all at once — intensifying the religious synergies and tensions that have defined Jerusalem for millenniums.

To some, the overlap embodied the wonder of Jerusalem and the semblance of coexistence among its peoples.

“Jerusalem right now is a symphony of people reaching out to God,” said Barnea Selavan, a rabbi and teacher who had just finished burning his family’s remaining leavened bread.

To others, the convergence highlighted the incompatibilities and the inequities of a city where many Palestinian residents consider themselves living under occupation. Clashes broke out again Sunday after Israeli police officers stopped Muslims from entering the Al-Aqsa Mosque compound for several hours to allow Jews to enter for prayer

“Jerusalem is like a salad bowl,” said Mustafa Abu Sway, a professor of Islamic thought who had just left the mosque Friday. “You have intact tomatoes and intact cucumbers and intact lettuce leaves. You don’t have a salad.”

And to some Christians whose Easter Friday procession started earlier than usual to avoid inconveniencing Muslims heading to the mosque, the convergence of holidays underscored the sense of being a minority within a minority. 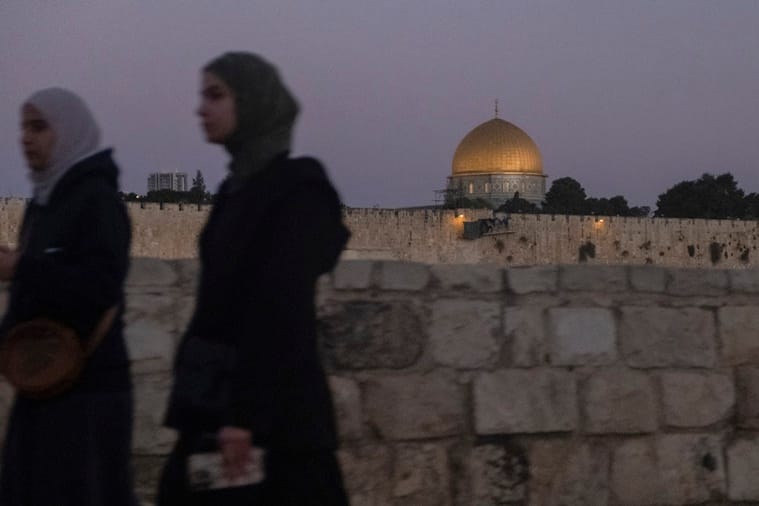 The Dome of the Rock shrine at al-Aqsa Mosque in the Old City of Jerusalem, April 15, 2022. (The New York Times)

“We are like a potato mashed between everyone,” said Serene Bathish, a leader of an Arab Christian scout club, who helped organize the Easter procession. “We are between two fires.”

Far from seas and major rivers, and high up in the mountains, Jerusalem, for much of its history, held little strategic significance, militarily or commercially. Its power and relevance most often lay in the spiritual hold it had over millions of people, many of whom had never visited it and to whom it had often meant drastically different things.

For Jews, Jerusalem is their ancient capital, the seat of King David and the site of two ancient Jewish temples where they believe God’s presence dwelled. For Muslims, it was from that same site that the Prophet Muhammad rose to heaven and on which they built the compound of the Al-Aqsa Mosque, the third-most-sacred site in Islam. For Christians, it is the city where Jesus was crucified and ascended into heaven — where Christianity was born.

The Old City was ruled by the Ottomans until 1917, the British until 1948 and Jordan until 1967, when Israel captured and later annexed it. Much of the world still considers it occupied, and Palestinians hope it will be within the capital of a future Palestinian state.

“Everybody has a Jerusalem in their head,” said Matthew Teller, author of “Nine Quarters of Jerusalem: A New Biography of the Old City.” 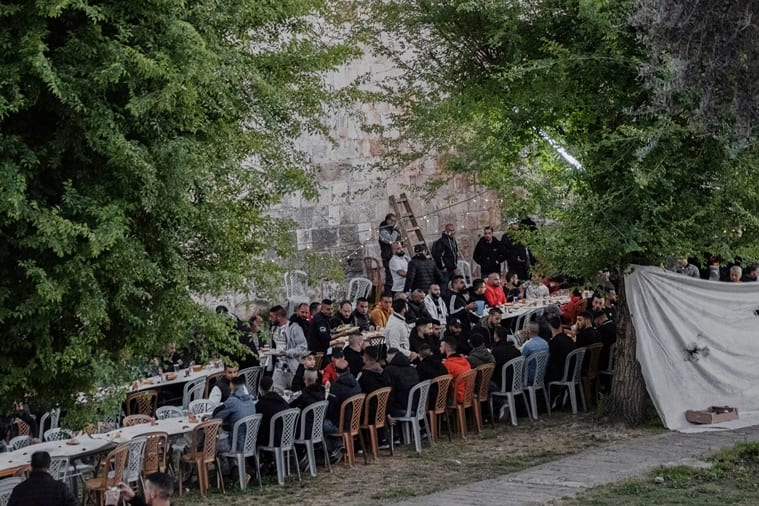 Muslims gather next to Damascus Gate in the Old City of Jerusalem to break their Ramadan fasts, April 14, 2022. (The New York Times)

“When you get there and you do actually see it for real,” he said, “it can never match up.”

As a case in point, Thursday night, the eve of the first convergence of the three holidays since 1991, began with an intense traffic jam.

On the narrow road that circles the Old City, Christians like Bathish were heading to a service beside the Garden of Gethsemane, an olive grove full of wizened trees where tradition holds that Jesus was arrested on the night before his crucifixion. And Muslims like Abu Sway were heading to the Al-Aqsa Mosque, where tens of thousands had just broken their Ramadan fast at a communal iftar, or meal.

Around the Old City walls, built by the Ottomans who ruled Jerusalem in the 1500s, Muslim families picnicked here and there on the grass verges. They broke their fasts to a soundtrack of car horns, distant chants from the mosque and, later, faint choral melodies wafting from the basilica at Gethsemane.

In front of everyone was gridlocked traffic, surrounding this ancient city with a ring of cars and buses, the mystical encircled by the profane.

At Selavan’s apartment in the Old City’s Jewish Quarter, the scene was a little quieter Thursday night. Christian worshippers attend a washing-of-the-feet ceremony at the Monastery of Saint Saviour in the Old City of Jerusalem, April 14, 2022. (The New York Times)

He and his wife, Shoshana, symbolically hid pieces of their last remaining leavened bread — bought from a rare Arab-run kosher bakery in the Old City — around their home, behind chairs and a garbage can and under tables. Then they set about searching for the pieces that the other had hidden.

According to Jewish teaching, Jews must not eat leavened bread during the week of Passover, which celebrates the ancient Israelites’ escape from slavery in Egypt. The Old Testament says that they escaped so quickly, they did not have time for their bread to rise.

A half-mile away, hundreds of Christians at Gethsemane, including Bathish, began a procession from the basilica. They chanted and carried candles through the traffic jam, the quotidian again mingling with the ethereal.

To Bathish, it is a privilege to celebrate Easter where it started and to live a few yards from where Christians believe Christ died. 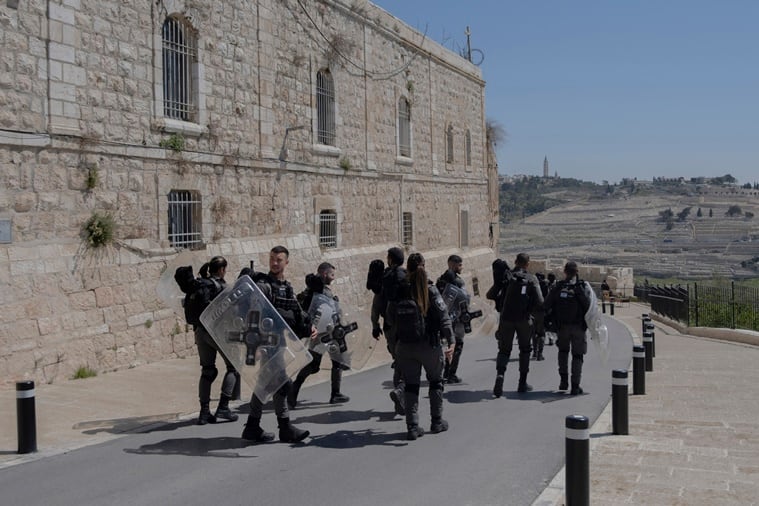 Israeli police patrol near Temple Mount, a site sacred to Jews and Muslims, shortly after clashes erupted at al-Aqsa Mosque, in the Old City of Jerusalem, April 15, 2022. (The New York Times)

“But actually, we don’t get to enjoy it that much,” she said. There are an estimated 5,000 Christians left in the Old City, alongside roughly 30,000 Muslims and 5,000 Jews — and they feel squeezed between both.

A few hundred yards away, on the promontory where Jews and Christians hold that Abraham tried to sacrifice his son Isaac, Abu Sway, the Islamic theologian, was in his element. With his wife, daughter, son-in-law and two grandchildren, he listened to a reading of the Quran.

To Jews, he was at Temple Mount, the site of a Jewish temple destroyed by the Romans. But to Muslims, this is the Al-Aqsa Mosque compound, a 36-acre esplanade that includes the golden Dome of the Rock, a shrine marking Muhammad’s ascent.

An imam had just read part of the Quran about the Prophet Musa, known as Moshe to Jews and Moses to Christians, and would shortly begin a chapter on Muhammad’s journey to Jerusalem.

Soaking in the moment, “it seems that I am in love,” Abu Sway said. “When you enter the Aqsa Mosque,” he said, “you feel that you are blessed, that it’s something special that not many people have access to.”

But to the professor, that realization was bittersweet.

To Barnea Selavan, the convergence of the holidays embodied the shared life of the city, and proved the Israeli state’s efforts to preserve the freedom of worship. “The thinking person realizes the freedom that they have under the Israeli government to serve God in their way,” the rabbi said.

But to Abu Sway, the convergence was a reminder that many Palestinians living in the occupied West Bank and Gaza are not allowed to enter Jerusalem to worship. And the violence Friday at the mosque, between Israeli police and Palestinian stone-throwers, highlighted not coexistence, but coercion.

“There can be no coexistence,” Abu Sway said, “when you have occupation.”