Sanjay Nagar bore the brunt when violence broke out on April 10.

Khargone in Madhya Pradesh – where violence broke out on Ram Navami — has been going through an endless loop of communal clashes over the recent years. So much so, that some of the Hindu families living in the area are eager to put up their houses for sale, even the ones they received under Central schemes.

“Yeh Makaan Bikau Hai‘ (This house is on sale)” is emblazoned on many houses in the area, some of them built under the PM Awas Yojana.

Rakesh Kale, one of the house owners who wrote it, says they are fed up with the violence.

“We have been the first and worst targets of rioters during communal violence at least four times since 1992. Every time we rebuild our lives after losing our properties in the communal violence, another riot happens,” he told NDTV.

This time, rioters from adjoining areas “stormed into my house and tried to set it ablaze,” he added.

While Kale said he had himself written House on Sale outside the house, the Khargone district collecter Anugraha P told on Kale’s face only, that the ‘Makaan Bikau Hai’ line hasn’t been written by the house owners, but is the handiwork of outsiders, who are hell bent at disturbing the communal amity in the area. But Kale refuted her claim in front of our camera and said ” We have never got any protection so we can’t live here, I have written this myself”.

The Sanjay Nagar locality is a Muslim-dominated area, where just 20-plus Hindu families from lower socio-economic strata live. The area bore the brunt when violence broke out on April 10 as religious processions were held in neighbouring Talab Chowk. 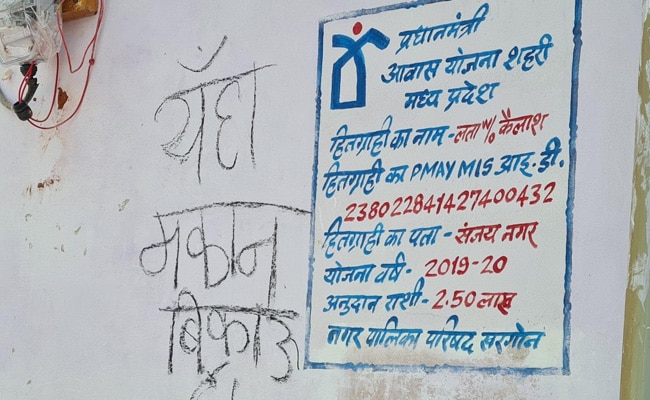 “Yek Makaan Bikau Hai’ (This house is on sale)” is emblazoned on many houses in the area, some of them built under the PM Awas Yojana.

Irked with the music, a section of people threw stones at the procession, and the violence escalated, ending with arson and police crackdown. Buses were burnt and several policemen were injured during efforts to control the mob.

Today, Kamini, whose husband works as a daily wage labourer, said, “Not only my family, other Hindu families are also eager to sell their houses and lead a peaceful and safe life elsewhere”.

A few houses away, Preeti Chandole said the rioters set fire to her house, after carrying away everything they could.

“Not only did they rob us of the wheat we harvested, they did not even spare the (earthenware) vessels to store water or the bed rolls. This is the third time the house has been attacked in last few years. We don’t have any option but to put the house up on sale,” she added.

Another local, Manjula Bai, lost almost everything as well.

“They burnt almost the entire house, after we fled to save our lives. Our TV set was destroyed, valuables were taken from almirah and even our stock of onions looted,” said the 64-year-old, a daily wage labourer who lives with her daughter’s family.

Claiming that it was outsiders and not locals who wrote the “For sale” messages, Khargone district collector Anugraha P said the two communities have no problems with each other and have resolved to live together as in the past.

“Some families in Sanjay Nagar and Bhavsar Mohalla are apprehensive about the future, owing to losses suffered during the recent violence. But they, too, have now decided to stay back following our assurances for their safety and security,” he said.

Shiraz bi’s house near the Talab Chowk area was also set on fire by rioters during the violence. “Boxes, rice, utensils, new clothes were all burnt. When the rioters came we were making garlands (to offer in temples), my younger daughter said, Ammi they have entered our house … she was in panic … she said they are looting everything,” she said.

“The rioters were from other places and targeted shops and houses of our community. We appeal to the government to compensate us for losses,” sais Islam, who lives in Bhatwari Mohalla.

Meanwhile, the situation in Khargone and Barwani is under control. With no major incidents in the last 48 hours, the administration has  relaxed curfew norms. Night curfew, however, will continue.